BURIED DEEP IN OUR DNA, SOMETHING ANCIENT IS AWAKENING

The year is 3231 CE. Humanity is changing, and EXO special warfare operator Derek Mondragon can barely keep up. For one, “human” has left the lexicon–“accidentals,” as biologically unaltered humans are known, occupy Earth and Mars with “newstylers,” a growing class of bio-engineered shapeshifters.

When the newstylers rebellion ends in an uneasy truce, Mondragon and his buddy Don are sent to clean up. It was supposed to be by the book–in, out, easy. But Don, a Gnosint trained from birth to read unreadable patterns, takes a pulse laser round to the head.

Waiting for his friend to recover, Mondragon remembers Don’s most recent obsession: the fifteenth-century Voynich manuscript. There was something about a prophecy, a cryptographic key hidden in the deepest strands of human DNA… but there’s no time. The Emperor has issued the Edict of Shanghai, a decree making the bio-engineering of Mars’s hatchery children obligatory–and it won’t be long before Mondragon’s daughter is among them. Mondragon’s days of playing by the rules are over.

Aran Jane’s Mondragon is a stunning and deeply complex debut that explores what it means to be human. Blending philosophy, theoretical science, and breakneck action, Mondragon chronicles the full spectrum of nature and artifice through one man’s rebellion against a tyrant’s plot.

An inventive, ambitious sci-fi adventure … Jane’s world is incredibly expansive and well-drawn. Fans of immersive sci-fi, like the work of Philip K. Dick, should take a look; an auspicious start for Jane.
Kirkus
Intelligent, multifaceted, and engaging … Unexpectedly infused with a kind of technopschedelic philosophy, that tempts the creative mind with a feast of scientific potential. Aran Jane’s ’Mondragon’ explores the artfulness of creative science and is an exercise for both the mind and heart.
Foreward Reviews
Jane’s dialogue is light and fun. … Science fiction fans can find much to enjoy in Jane’s entertaining characters and an intricate plot that culminates in a compelling and satisfying conclusion.
Blueink Review 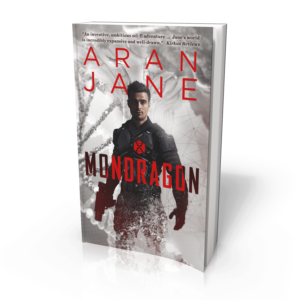 Get your copy on Amazon Today!

Take me to Amazon